Punch the Monkey follows the mold of other rhythm action games such as Dance Dance Revolution and Bust A Groove. All of the music in the game comes from the three CDs bearing the name Punch the Monkey. These CDs contain remixes of Lupin theme and background songs from various artists. Boasting Guncon and analog controller support, Punch the Monkey is an addicting game with loads of replay value. The normal game contains seven levels with each level having four difficulty levels: "Easy", "Normal", "Hard", and "Blind".

Let's start with the normal game play. A music video filled with clips from the first and second series plays on the top half of the screen. The bottom half of the screen contains a bar with a target sight in the middle. While the music plays, targets fly across the bar from left to right. Each target has the symbol of the button you need to press to shoot down that target. Hitting the target dead center in the sight earns you a "Great" rating. A non-dead center hit earns you a "Good" rating. Hitting the target outside of the sight earns you a "Bad" rating. Pressing the wrong button earns you a "Poor" rating.

Above the music video is a bar indicating whether or not you will have completed the level when the video is over. "Great" and "Good" ratings move the bar towards successful completion of the level; "Bad" and "Poor" ratings move the bar towards the "Game Over" portion of the bar. The further you get towards "Game Over" the more distorted the music and video gets.

While you are playing, bonus cards appear to the right and left of the music video. Pressing L1 will shoot down cards on the left, and pressing R1 will shoot down the cards on the right. Shooting these cards down is the key to beating the high score for each level. At various points in the level, the bar doubles, and targets begin flying from both sides of the screen!

Once you have beaten all seven levels on each difficulty level from "Normal" on up, you unlock the bonus games. This is where the Guncon support finally factors into the picture. The first bonus game is a shooting gallery. You are given a particular character card to match; you must shoot down all the matching cards that appear. After completing a level, you earn a certain amount of coins depending on how well you do. These coins buy you access to each of the music videos; each music video costs a certain amount of coins. Have not been able to unlock bonus game two and three yet. The nice thing is that you can play the first bonus game even if you do not have a Guncon. In fact, I find it easier to play with the normal controller.

The second bonus game is a variation on Breakout. Instead of a paddle at the bottom of the screen, you shoot the ball to bounce it around the level. The bottom of the screen contains blocks that break after a few hits. Once the block is gone, you can lose a ball by having it slide through the hole at the bottom. At the top of the screen, money bags, safes, etc. await the ball's touch; these items add to your coin total bringing you a few steps closer to purchasing another movie. Unless you have Jigen-esque shooting abilities, I do not recommend trying to use the Guncon to play this game.

The final bonus game is a slot machine. You can bet up to three coins at one time. While it is a fun game to play, I don't recommend trying to build up coins this way.

If you have a Guncon, you can also play through the seven normal game levels. Instead of pressing buttons, the targets are now gold coins. You now have to aim directly at the bonus cards making it even more difficult to achieve that high score. The target sight will also move along the bar to further increase the difficulty.

This highly addictive game should be in the hands of every Lupin fan. Need additional help? Consult the FAQ. 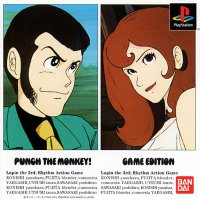