Missed by a Dollar

Lupin has disguised himself and is bidding on a ring up for auction in New York City. The ring holds the secret location of a legendary broach; the broach is said to bring good fortune to whoever wears it and has been in the possession of Napoleon, Lenin, and Hitler. When a bidder outbids him by one dollar, he decides to take the more traditional route and steal it. However, a heavily armed group of men relieve him of his prize. They work for Cynthia, the head of Bank of World.

Lupin gathers the troops to try to steal the ring back from the heavily protected headquarters. He succeeds in stealing it once again but appears to be fatally shot as they make their getaway. If Lupin is dead, who will stop Cynthia from obtaining the broach!?

One of the more unique specials, 1$ Money War manages to bring a fresh approach to the Lupin franchise but does not quite manage to propel itself into the upper echelon of titles. This story revolves around a ring inscribed with the location of a mystical broach; any dictator that has possessed the broach has had good fortune in all they do. Lupin's attempt to purchase the ring at auction is foiled when a call-in bidder snatches it away with bid that is one dollar higher than his. So begins Lupin's dealings with Cynthia, the ruthless head of the Bank of World.

Cynthia is a worthy foe for Lupin; she is a strong, cerebral female character who is equally as devious as Lupin. What makes this special stand out from the standard formula is this more cerebral approach both Lupin and Cynthia use to battle each other. It skillfully plays the plot out as the two con men attempt to outwit each other at every turn. Remarkably, the pacing of the story does not suffer at all but rather flows along and keeps the viewer glued to the screen.

There are still plenty of car chases, gun fights, action, and humor, as one would expect from a Lupin title. Of particular note is Goemon's attempts to lead a more pure life by helping a traveling priestess collect alms. However, he fails at the traditional methods and soon finds himself tagging along with the gang to procure alms in a less than conventional manner under the guise of "training". The fruits of his training are predictable but quite amusing.

The special does use one standard gimmick with little success though; the touted "twist" for this special is that Lupin apparently dies. The audience would be hard pressed to believe that Lupin would actually die, so it becomes a matter of when we will see him reappear. Unfortunately, it does not take him very long to reappear making the twist seem mostly irrelevant to the plot. Also, it would have been great to see the rest of the gang carry the special for a longer period; while past Lupin titles have been centered on a particular character, none of them have let the gang sans Lupin carry the show. A great opportunity to make the twist meaningful while exploring a fresh angle on the franchise was missed here.

But, the story remains engaging enough to compensate for this shortcoming. It also combines some great vocal tracks into the special making the music memorable. A fun title to watch, 1$ Money War just lacked something intangible that would place it in my list of all-time favorites, but it is an accessible title for both the die-hard and casual Lupin fans. 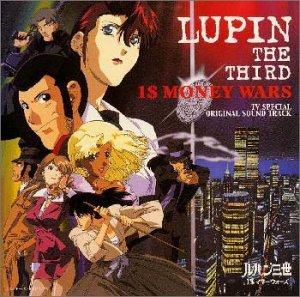