We only had to wait two years after the success of the Woman Called Mine Fujiko TV series to see a continuation of its style and tone. Picking up after that series, the goal of the film was to show how Lupin and Jigen became close partners. The film was given a limited screening at Tokyo's Shinjuku Wald 9 theater.

Lupin and Jigen have their sights set on a treasure worth stealing called the Little Comet located in the country of East Doroa. The country has fortified its borders after a singer named Queen Malta was assassinated in the neighboring country of West Doroa. Despite the two countries being enemies, Lupin and Jigen still plan to steal the treasure. During the heist, Jigen was almost killed by a skilled sniper named Yael Okuzaki. His specialty is preparing tombstones for his targets before executing his kills. It is said that no one has survived after Yael makes a grave for that target. 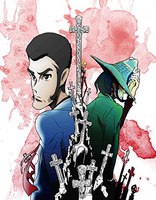