The Lupin franchise has never been shy about trying to squeeze cash out of every available avenue – Exhibit A: The Secret Files 2 ~Sound Collection~. For your money, you received a collection of all the opening and closing sequences for the various TV series and the animated theatrical releases. Also included are the eye-catch sequences from the second TV series. The most notable portion of this collection are the monaural and stereo versions of the second series songs. There is a significant difference between the two versions as the stereo version adds in a lot more effects.

Beyond the initial VHS release, I have never seen this title released on laserdisc. It did find a new home in the LUPIN III Theatrical DVD LIMITED BOX DVD set released on 2003 October 24. 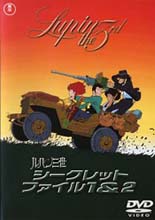